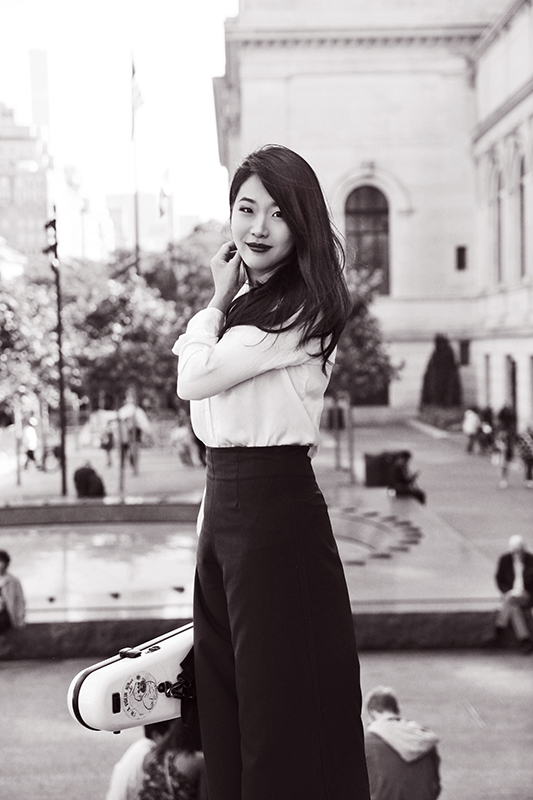 A recipient of the 2015 Avery Fisher Career Grant, as well as a top prizewinner of the 2012 Walter W. Naumburg Competition and the Astral Artists’ 2010 National Auditions, Kristin Lee is a violinist of remarkable versatility and impeccable technique who enjoys a vibrant career as a soloist, recitalist, chamber musician, and educator. “Her technique is flawless, and she has a sense of melodic shaping that reflects an artistic maturity,” writes the St. Louis Post-Dispatch, and The Strad reports, “She seems entirely comfortable with stylistic diversity, which is one criterion that separates the run-of-the-mill instrumentalists from true artists.”

In addition to her dynamic performing career,  Lee was recently appointed to the faculty of University of Cincinnati College-Conservatory of Music as Assistant Professor of Violin. She is the artistic director of Emerald City Music, a chamber music series she co-founded in 2015, that presents authentically unique concert experiences and bridges the divide between the highest caliber classical music and the many diverse communities of the Puget Sound region of Washington State. She is also a member of Camerata Pacifica in Santa Barbara.

An accomplished chamber musician, Kristin Lee is a member of the Chamber Music Society of Lincoln Center, performing at Lincoln Center in New York and on tour with CMS throughout each season. For seven years, Lee was a principal artist of Camerata Pacifica in Santa Barbara, sitting as The Bernard Gondos Chair. She is also concertmaster of  the Nu Deco Ensemble in Miami, Florida, and is a member of Steve Coleman’s Natal Eclipse, a hybrid chamber-jazz ensemble that explores the very foundations of group improvisation and spontaneous composition. Lee has also appeared in chamber music programs at Music@Menlo, La Jolla Festival, Medellín Festicámara of Colombia, the El Sistema Chamber Music festival of Venezuela, the Sarasota Music Festival, Festspiele Mecklenburg-Vorpommern of Germany, the Hong Kong Chamber Music Festival and the Bridgehampton Chamber Music Festival, among many others.

Lee’s performances have been broadcast on PBS’s “Live from Lincoln Center,” the Kennedy Center Honors, WFMT Chicago’s “Rising Stars” series, WRTI in Philadelphia, and on WQXR in New York. She also appeared on Perlman in Shanghai, a nationally broadcast PBS documentary that chronicled a historic cross‑cultural exchange between the Perlman Music Program and Shanghai Conservatory. She made the world premiere recording of Vivian Fung’s Violin Concerto, written for her, which won a Juno Award and is available on Naxos.

Born in Seoul, Lee began studying the violin at the age of five, and within one year won First Prize at the prestigious Korea Times Violin Competition. In 1995, she moved to the United States and continued her musical studies under Sonja Foster. Two years later, she became a student of Catherine Cho and Dorothy DeLay in The Juilliard School’s Pre-College Division. In January 2000, she was chosen to study with Itzhak Perlman after he heard her perform Mendelssohn’s Violin Concerto with Juilliard’s Pre-College Symphony Orchestra. Lee holds a Master’s degree from The Juilliard School, where she studied with Itzhak Perlman and Donald Weilerstein, and served as an assistant teacher for Perlman’s studio as a Starling Fellow. She has served on the faculties of the Aaron Copland School of Music at Queens College, the LG Chamber Music School in Seoul, Korea, El Sistema’s chamber music festival in Caracas, Venezuela, and the Music@Menlo Chamber Music Festival.